The History of eLearning

Distance courses were available even before the internet was established to provide students with education on certain subjects or abilities. Isaac Pitman used letters to teach his students shorthand in the 1840s. This type of symbolic writing was popular among secretaries, journalists, and other people who had to take a lot of notes or write a lot. Pitman, a certified teacher, received completed assignments by mail and then sent his students new work to complete using the same approach.

The very first testing machine was invented in 1924. Students could use this equipment to put themselves to the test. In 1954, Harvard Professor BF Skinner devised the “teaching machine,” which allowed schools to provide students with pre-programmed training. However, the first computer-based training program was not offered to the world until 1960. PLATO, or Programmed Logic for Automated Teaching Operations, was the name of the computer-based training program. It was created for University of Illinois students, but it has since been adopted by institutions throughout the region.

The initial online learning systems were primarily designed to provide students with knowledge, but as the 1970s progressed, online learning began to become more participatory. The Open University in the United Kingdom was eager to take advantage of eLearning. Their educational system has traditionally been heavily based on distance learning. Course materials and correspondence with tutors were previously distributed via mail. The Open University began to offer a greater choice of interactive educational experiences as well as quick interaction with students via email and other means with the advent of the internet.

By the early 1990s, several institutions had been established that only offered online courses, utilizing the internet to bring education to people who previously would not have been able to attend a college owing to geographic or temporal constraints. Technological improvements also assisted educational institutions in lowering the expenses of distant learning, which was passed on to students, allowing education to reach a wider audience.

Businesses began embracing eLearning to teach their personnel in the early 2000s. New and seasoned professionals both now have the opportunity to increase their skill sets and improve their industry expertise. Individuals were given access to programs at home that allowed them to get online degrees and better their life by expanding their knowledge.

As schools around the world were shut down due to lockdowns, educational institutions scrambled to find a means to continue operations from afar. If it seemed like everyone was using Zoom all of a sudden, it was because they were: in April of 2020, Zoom had over 300 million daily meeting participants. The video conferencing program became the primary mode of education for students of all ages.

The Future of eLearning & the Metaverse

The next evolution is eLearning is definitely virtual reality and the Metaverse. Augmented Reality (AR) and Virtual Reality (VR) technologies have a strong foundation in Artificial Intelligence and are ready to turn the physical world into virtual space. The update of Facebook to Meta is causing a stir in the IT world when it comes to AR and VR technologies and apps. The metaverse is a virtual social realm in which users can build their own avatars, customize them, and engage in real-world activities.

The metaverse will, without a doubt, assist the eLearning sector. In today’s world, a student prefers to learn with their smartphone rather than a book. Metaverse apps can revolutionize the eLearning industry by providing students with a virtual place where they may wander, scribble notes, and chat with other students. They can also play games in a virtual reality that is quite similar to reality. Additionally, kids can use the planned apps to modify their attire, haircuts, and expressions, among other things.

It’s very exciting to see where VR and the Metaverse will take eLearning in the coming years! 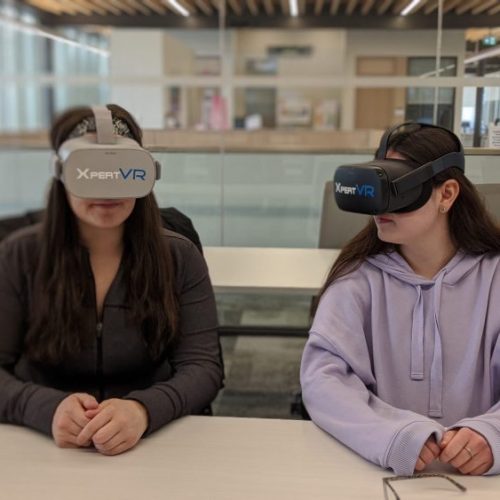